"Be careful what you wish, for," has been said often.
My last blog, "Snow going,"  ended with,  "Maybe one more storm."
The ground patterns I had been watching around the trees
have entirely disappeared.
But the temperatures are still below freezing at night (12 last night) and well above during the day (40 at the moment).
Meaning,
We are left with confused icicles! 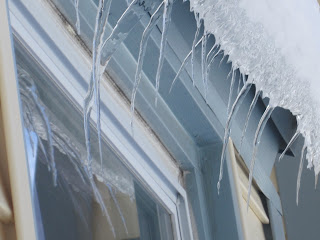 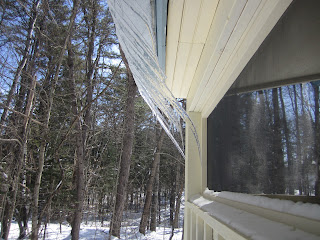 And confused people...
It's the first day of Spring, but looks like winter, feels like winter in the morning,
and turns to Spring by afternoon...the old case of March
coming in like a lion and out like a lamb.
March is definitely in transition. 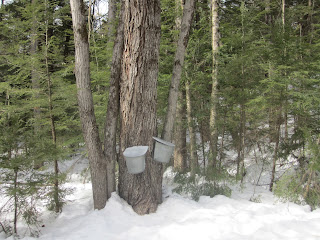 Sap is still rising, however, and sugar shacks are still boiling, 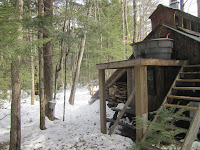 so for those of us whose creativity is aligned with the weather, we can move onward with our projects.  If Spring doesn't appear to be here in full force, at least it is wavering and showing signs of approaching, despite the "backslide" into winter.
Admittedly, ground patterns had me thinking about Spring, but the snow pushed me back to winter thoughts and I've used it to advantage. Artists can find patterns in any season...

Check out my changed home page at ... barbaramcevoyartist.com
I've switched to White Mountain emphasis, have two new paintings of winter, two categories added to my web (Can you tell which are the new ones?) and a few last comments on winter as well.

Do I dare say it?

"But, maybe, perhaps, we could have one more snow storm? "

Posted by Barbara McEvoy, Artist at 11:54 AM

Barbara McEvoy, Artist
Freedom, NH
Art, nature and yoga, the supporting sisters of my life, have taken many forms and spurred many adventures over the years. Retired to a new life, Barbara McEvoy, Artist, and living in the Lakes/White Mountain Region of NH, I finally have time to actively share my visions. Perhaps as an artist I can take you places you haven’t been, and help you see where you are right now quite differently! It amazes me how a few moments of mindfulness each day can change our world.